Saying something through the flowers,
to use Joseph Beuys’ words: “Let flowers speak!”

During my research on “Lintvelde”, I was particularly struck by the parade floats, ships and cars made of flowers, which have been planned annually for the flower parade in Beltrum since 1964 in the active “Lintvelde float-building community” by a creative, experimental and ever-growing group of residents. The dahlia has been grown in Lintvelde since 1968 just for decorating these parade floats and large dahlia fields were planted at Bruggert in Lintvelde.

Since the early 1980s they have also been bred for this purpose in private gardens in Lintvelde. I therefore set out to find photographs of the gardens and landscape in Lintvelde and, in my artistic exploration, tried to take the language of flowers as a means of non-verbal communication as the starting point for my picture collage. The famous Düsseldorf artist Joseph Beuys, who grew up in the Lower Rhine region on the Dutch border, would have turned 100 this year, and many exhibitions are currently being dedicated to him. “Let flowers speak”, he once said. Here he becomes the good spirit for the future dahlia cultivation in Lintvelde. 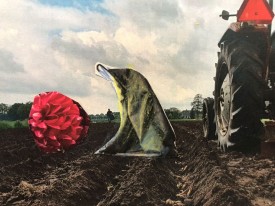 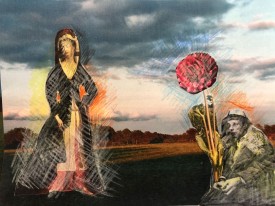 on november 25 • by Anja Middelkoop