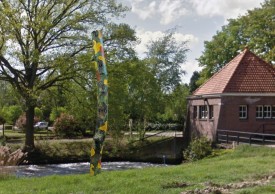 This work
is a monument for Thuum Ceelen to be made in enamel camouflage paint on bronze casting.
It takes the form of a tree without branches and leaves and also has stainless steel and brass bullet casing inserts.

October 1944
I read about Thuum Ceelen from Roeven the hamlet of Nederweert in the Netherlands who was injured in the head by shrapnel on October 3rd, 1944.
Thuum died two days later from his injury. I thought that it would be good to make a monument to him.

Monument for Thuum Ceelen is based on
an earlier work I made after a conversation with the artist Gunther Hülswitt during a two person exhibition at Kunstverein projectraum-bahnhhof25, Kleve, Germany in February/March 2015.

Gunther Hülswitt mentioned to me that when he collected wood from the region around Kleve to carve he would often blunt his chainsaw on shrapnel and bomb fragments impregnated in the trees. These metal fragments were from the second world war.

The sculpture is an enlarged version of a work: “no.4 Trunk series” 2019 [sycamore, acrylic paint, steel fragments, bullet casings] which was exhibited in Städtisches Museum Koenraad Bosman, Rees, Germany in June/July 2019.

I have chosen the location next to the Sluis and the The Roeven Hydroelectric Power Plant where, as a protective measure in the 2nd world war, the bridge was blown up and with an optimistic forward thinking vision the hydro electrical station was built in 1920.

on januari 24 • by Anja Middelkoop